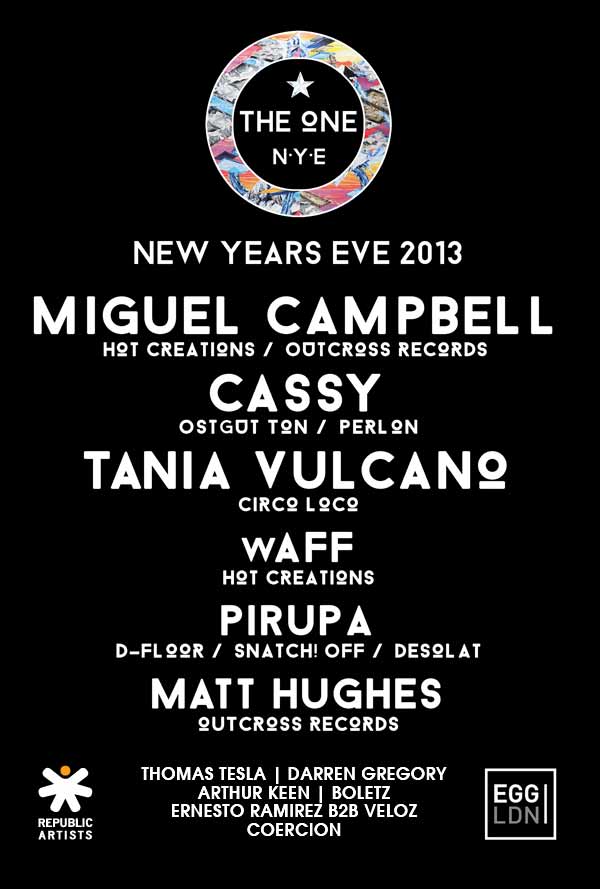 We can now confirm that we will be hosting the second floor for THE ONE NYE at EGG London with a stellar line up including Miguel Campbell (Hot Creations/ Outcross), Cassy (Ostgut Ton/ Perlon), Tania Vulcano (Circo Loco), wAFF (Hot Creations), Pirupa (D-Floor/ Snatch! OFF/ Desolat) and Matt Hughess (Outcross)

We are open until 3pm this year!

Are you a group of at least 7 friends? Call 07883068641 or drop us a line to info@republicartists.com to check out the best deal available. Free ticket delivery, no booking fees

December 31st is always a special night but this year EGG have made sure they have put more time and effort than ever before into the New Year’s Eve party by launching a brand new party series called The One. Headlining will be Circo Loco resident Tania Vulcano, Hot Creations and Cocoon star wAFF and Italian Desolat producer Pirupa along with plenty more talented DJs still to be announced.

As well as the sounds on the night, the club will be transformed with extra production including an Ibiza theme in the garden area with Cafe Mambo resident DJ Dee Montero & Eden Ibiza legend Alex Ellenger playing as well as live percussion, plus indoor fireworks, dancers and much more.

Legendary Circo Loco stalwart Tania Vulcano will be making her Egg London debut just in time for its biggest party to date. Circo Loco at DC10, Ibiza’s best and most underground party, has been rocked to its very core for over a decade by Tania and her choice to join us for the night will surely have every serious clubber in the capital salivating!

Still in his early twenties and having been picked out as one to watch by DJ Mag at the start of 2013, wAFF is still very much in the ascendency with several releases on Hot Creations already under his belt and many more still to come. He is in huge demand and his international DJ calendar takes him from Tomorrowland Belgium to Sankeys Ibiza via headline slots at London clubs to name but a few.

Italian Pirupa is no longer breaking though – he’s already broken through. His ‘Party Non Stop’ track on Desolat is one of the label’s best selling singles and hit the top spot on Beatport. Such a popular track was it that Defected got in touch for re-release, offering up their release of it with Huxley and Riva Starr remixes plus its own mad video to boot. In recognition of his production talents, Pirupa won the Ibiza DJ Award’s Track of the Season accolade on the White Isle this summer. Expect plenty of basslines, bad ass grooves and charismatic sampling that will have you sweating for the whole duration.

Further more to this already stellar line up, we will be announcing one more extraordinary headline act that will leave people queuing round the block to get in, and their names on everyone’s lips.

So, we’ll see you on the dancefloor soon to celebrate the end of 2013 and the start of a whole new year!