Republic Artists Collective is back in Prague, stronger than ever. Join the troops!
Sat 10.10 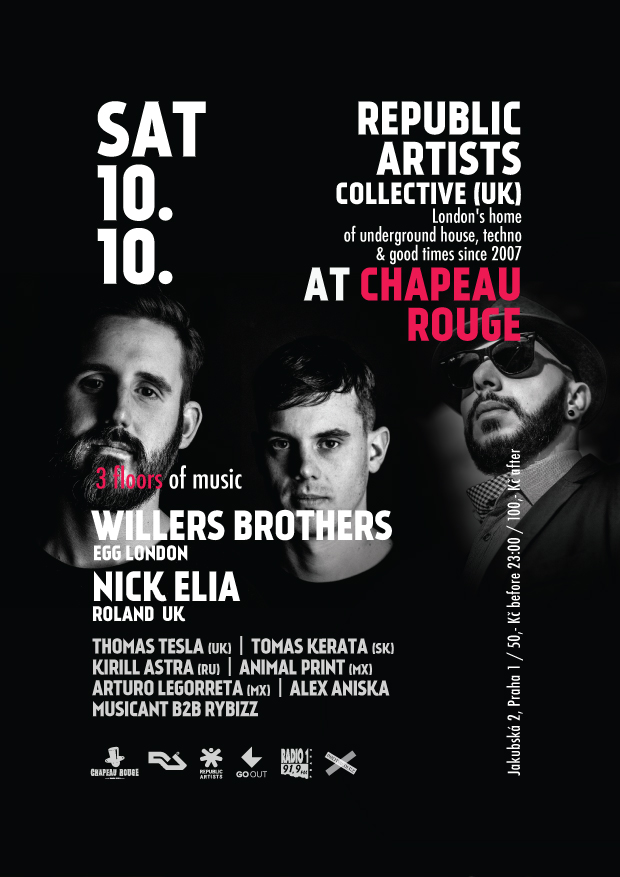 ► Willers Brothers
The Willers Brothers are one of the most exciting young acts to hit London’s electronic music scene in quite some time. Since arriving in the capital in 2012, they’ve quickly notched up an impressive array of achievements, from a residency at Egg London to several well-received releases,to hosting shows on London’s premier online station’s like Hoxton FM, Egg LDN Radio and Le Chic FM.

► Nick Elia
Nick Elia has been a regular aficionado on London’s club scene, since the mid
2000s, with performances at venues Egg, Pacha, Lightbox, Ministry of Sound,
Area, Crucifix Lane and Whitehouse to name a few, as well as touring a host of
international spots such as Eden (Ibiza), Chapeau Rouge (Prague), Rockhouse
(Austria), Klub D (Cyprus), Biennale (Skopje) and DV (Greece). He has released
cuts on labels Republic Artists Records, Wasabi Generals Records, DSR Records
and Aesthis. Nick’s productions have been supported by Paco Osuna, Spartaque,
Tiga, B.Traits, Cevin Fisher, Kiss FM, Daniel Bortz, Colin Dale and dubspeeka
among others, as well as been remixed by Pol_On, Kozber, Oli_N and Elek-Fun.

His critically acclaimed record ‘Glue’ was featured on BBC Radio 1, where
DJ/presenter Hannah Wants said: “this is one of my favorite tracks out at the
moment [...] it’s absolutely going off”. Club-nights and promotion companies
that Nick has been involved in include Republic Artists, Deseveo, Ibiza
Gathering, Move, Space, Dirtydubbin and Seminor. He is an official Roland
Artist, working with the company’s live performance and studio gear.

In the past, Nick worked as a producer, for over 6 years, in recording studios
around the UK and Germany; most notably Schokopro, Naidoo-Herberger,
Baltic and M:CON Mannheim. He produced music for major artists such as
Xavier Naidoo and Söhne Mannheims, as well as working on cultural events
like ‘Autosymphonic’ with 20,000 attendees: “the project was so demanding
that the company had to fly in specialist Nick Elia to oversee the music
production” (SWR TV, Germany). His electroacoustic collaborative work with
Marios Joannou Elia ‘En Plo’ was premiered at Akademie der Kuenste
(Berlin) and was nominated for the Austrian Contribution to the 2009 ‘World
New Music Days’ in Sweden. ‘Vertumnus’ received the Luigi Russolo Prize
for electroacoustic music, awarded from Studio Forum (France), ElektraMusik
(Strasbourg), Gràcia Territori Sonor (Barcelona) and Experimental Studio
Slovak Radio & Monochromevision (Moscow). Moreover, ‘Die Jagd’ was coproduced
by the Stuttgart State Opera and Rampe Theater, and was selected to
be performed at Frühling festival in Munich.

Nick is an Audio Lecturer at SAE Institute and has delivered masterclasses at the University of Surrey and Keele University.