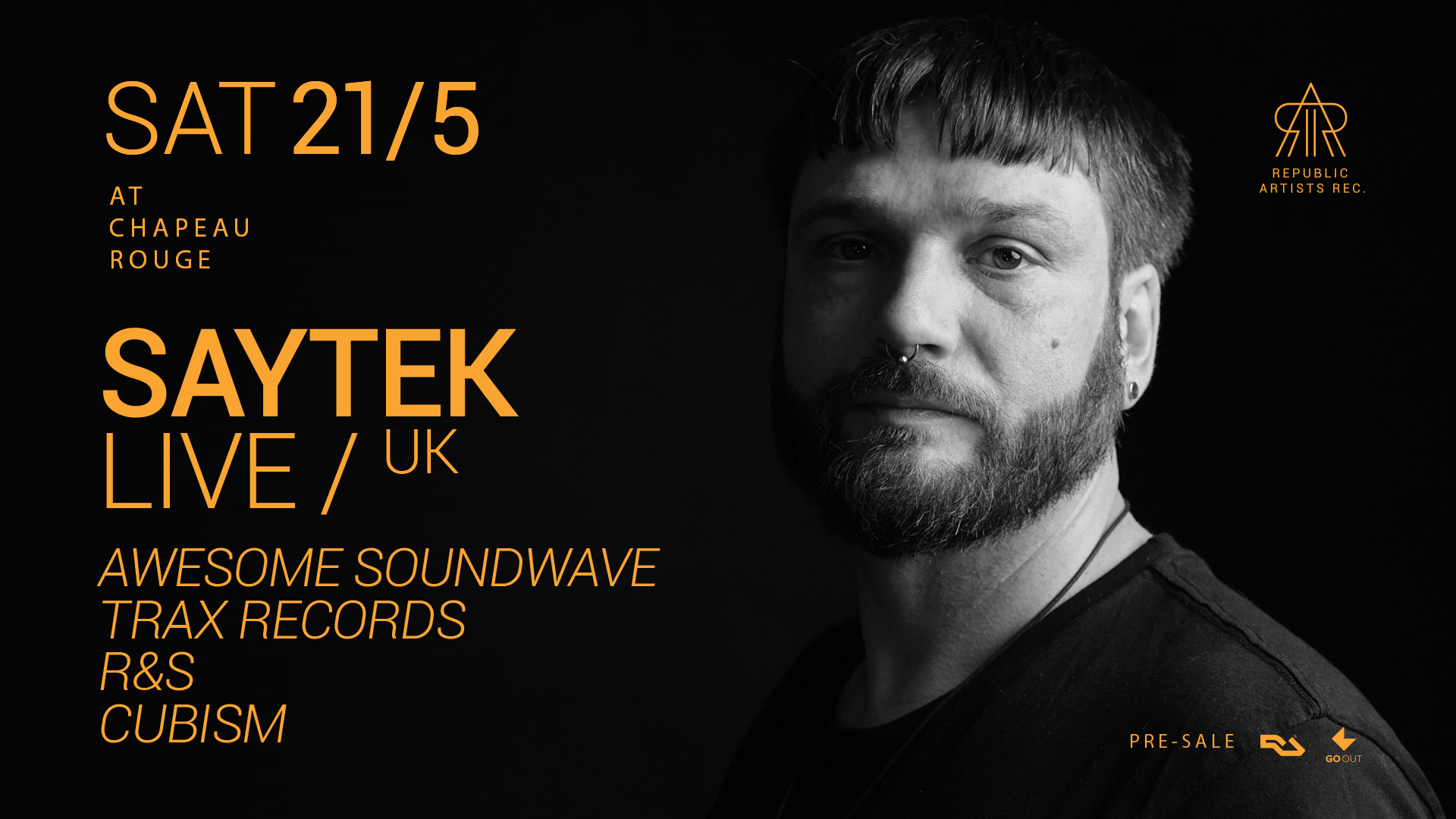 On Saturday 21st May, Saytek from Uk is bringing his drum machines, effect boxes, synths and other gear to Prague for two hour live show!
Pre-sale

Resident Advisor
https://ra.co/events/1515133
GoOut Link will followLine up:
+++++Techno floor+++++
Saytek Live
www.facebook.com/Saytek.live
www.soundcloud.com/saytek
www.instagram.com/saytek_live
Thomas Tesla
www.facebook.com/ThomasTeslaMusic
www.soundcloud.com/thomastesla
www.instagram.com/thomassuchytesla
+++++House floor+++++ TBA
++++++++Bar++++++++ TBA
“One of the Uk’s freshest and most exciting acts, All the music Written & produced by the man himself Amazing” -Carl CoxOver the past few years, UK artist, Saytek (aka Joseph Keevill) has carved himself a reputation as one of the electronic music scene’s most innovative live acts thanks to his impressive improvised shows. Described by Cox as “Absolute Genius when it comes to live” a sentiment echoed by his fans and many across the industry due to his mastery of machines (including analog synths, sequencers and drum machines) combined with unique energy and an ear for melody. His sound is broad and genre-defying, taking listeners on a journey through underground house, acid & techno that is tough yet intricate and deep.
To date, Saytek has released eight esteemed live albums, Live Jam tracks, EPs and 12” singles, on his Cubism imprint as well labels such as Awesome Soundwave, KMS, Trax, R&S, Superfreq, Liebe*Detail, Soma, Bedrock, fabric, My Favorite Robot Records, Wiggle and many more. His raw live recorded tracks have become the weapons of choice for the most respected DJs in the world across the spectrum of underground music.
His busy tour schedule has seen him booked for peak-time live performances at some of the best parties and festivals around the world. Highlights include Awakenings, Creamfields, Resistance, Shoom , Space Ibiza (RIP), Printworks, Mysteryland, and fabric London. Saytek also performs regularly at the heart of Berlin’s underground scene with shows at Tresor, Watergate, Sisyphos’s Hammerhalle and last year he was invited to perform at the legendary Love Parade founder, Dr. Motte’s Birthday at Suicide Circus.
If you are a fan of packed dance floors, house and techno music and good sound system than join the troops partisans!
www.republicartists.co.uk